The traditional food of Ecuadorian Coast Region is distinguished by the use of native ingredients of the coast, especially three very important elements: green plantain, peanuts and shellfish.

Few Latin American countries incorporate plantains in their typical cuisine like Ecuador does, and if you visit our coastal region you will notice that there is no dishes without at least one of these three ingredients.

Here I will present you the typical dishes of the Ecuadorian Coast so you can get to know more about our culture.

Traditional food and dishes of the Ecuadorian Coast

In no other region of Ecuador you will find a good encebollado like in the coast, one of the flagship dishes of Ecuadorian cuisine.

It consists of a fish broth (albacore fish) with yucca, onion, pepper, lemon, tomato and herbs. It is accompanied with bread, chifle (plantain chips) or canguil (popcorn), and a good orange juice cannot be missed as a drink.

This dish is consumed for breakfast and, sometimes, in the early mornings as a remedy to cure chuchaqui (hangover).

The ecuadorian ceviche differs a lot from the peruvian one because it is a soupy dish. You can find ceviches with different seafood: fish, shrimp, shell, octopus or mixed (fish and shrimp).

In this dish, the seafood is marinated in a mixture of lemon and orange juice, adding coriander, pepper, tomato, red onion and chili.

There are those who add tomato sauce to the mix, but it all depends on taste. And finally you can accompany it with popcorn, toasted corn (maíz tostado) or chifle.

In Manabi you will find the famous “ceviche manaba“: it is the same recipe, but they incorporate peanut paste. We recommend it 100%. In addition, in certain beach towns such as Puerto Lopez you will also find it completely pickled.

It consists of a green plantain ball mixed with cheese, chicharrón (pork rinds) or both – it that case, it is called “bolón mixto“. It is consumed mainly for breakfast.

In Ecuador you can find bolones of three types: verde, maduro (ripe) or pintón. These names correspond to the stages of the plantain that give it its flavor: while the verde is more salty, the pintón is sweeter and the ripe one, much sweeter.

In addition, in certain Manabi beach towns you will find a good variation of the bolón: its outer covering is crunchy, as they fry it before serving it.

If you come to Ecuador, you cannot leave without tasting this traditional food of Ecuadorian Coast.

It is similar to bolón de verde, but egg and milk are added to the mashed green plantain until a creamier dough is created. Cheese, pork rinds or both (mixed) are then added to this mixture.

The tigrillo is also consumed for breakfast (it is too heavy to eat at night), and you can accompany it with ají sauce and a good coffee.

The origin of this typical ecuadorian dish dates back to the province of El Oro, specifically in Zaruma. Hence, if you come to Ecuador, you may hear about the popular “tigrillo zarumeño“.

“Secos” or stews are of different meat types: chicken, hen, goat, pig or lamb. It consists of a dish made with yellow rice (prepared with achiote) and coriander leaves, fried ripe plantain (maduros) or chifle, and the meat element of your choice.

The most popular on the coast region of Ecuador are the “seco de chivo” (goat stew) and the “seco de pollo” (chicken stew).

But the interesting thing about this dish, beyond its flavor, is the story behind its name in spanish (seco means dry) because is somewhat incongruous to its presentation.

The best known legend is that its name comes from the English word “second”; that’s how the English citizens who worked in the province of Santa Elena in the 20th century called this “second” lunch dish (in Ecuador, lunches consist of a starter soup and a more loaded second dish. it is common to call them: the soup and the second = seco).

Sangos de verde are thick and soupy dishes made from green plantain and peanuts.

We clarify this to differentiate it from the corn sangos that are most consumed in the Ecuadorian Highlands.

The shellfish used in sangos de verde can be shrimp, fish, mixed (with additional shellfish such as shell, octopus, or crab), or tuna.

In addition, they are served with white rice, lemon, patacones or roasted potatoes.

Sangos are generally eaten as lunch or dinner.

Encocado is an autochthonous dish from the province of Esmeraldas, which its main ingredients are coconut milk and shellfish. Hence, you can find fish, shrimp, prawn or crab encocados.

Its original preparation makes use of fresh coconut (water and pulp) and it is the version that you will find in Esmeraldas restaurants. But its best known variation uses coconut milk, since in several cities on the Ecuadorian coast region you do not get fresh coconut.

You can accompany this dish with white rice, roasted ripe rice or chifles.

The corviche is a Montuvio manabita dish (Montuvio is the peasant of the coast) made with green plantain, peanuts and a refried fish.

Its presentation is oval and it is generally served fried to have a crunchy outer coating and a very soft interior. But you can also order it roasted or baked (and don’t forget to taste it with chili).

Over time, the corviche filling has changed: from being simply fish, now you can find shrimp or even squid. And you can accompany it with orange juice or a good old coffee.

In Ayampe beach you can find these delicious dish in the famous “La Cabaña del Corviche“.

The bun is made from green plantain, ground peanuts and fry fish. But unlike other recipes, this preparation is wrapped in a plantain leaf and then it is steamed. Hence its characteristic flavor.

It is generally consumed with chili and lemon, although there are those who also add white rice.

You will find this dish anywhere on the coast region of Ecuador, especially on the beach.

A traditional dish from Guayaquil cuisine. There are different parts of the city where you will find stalls to eat cangrejos criollos, a very common dish to eat at Sundays with the family.

They are prepared with beer, onion, celery, coriander, chili, peppermint, ripe plantain, basil and red crabs. And they are served with an onion, tomato and coriander salad, with white rice.

I remind you that to consume them you will need a board and a mallet, since you will have to crush their parts to remove the meat from inside.

However, in some places you can ask to be served the crab “pulled out”: that is, only its meat.

It is the lunch par excellence and one of the most traditional dishes in Ecuador’s Coastal Region. It consists of a well-served plate of white rice, fried or roasted meat, lentil or bean stew and accompanied with ripe fry platain (maduros fritos).

For those who do not know what “menestra” is, here in Ecuador it is a type of stew prepared with grains (beans, lentils, chickpeas) and a refried green pepper, onion, garlic, tomato, coriander and cumin.

It is common to find this dish at lunch stands all over the coast of Ecuador, and its popularity is that HUGE that even the KFC food chain added it to the national menu and is now the best-selling dish in their stores (in Ecuador).

Quite apart from the traditional food of Ecuadorian Coast region that we show you, I have the obligation to present you the following local delicacies from our town beaches.

A dish made of black shells with lemon, onion, tomato, oil and coriander.

Although in appearance it is not so pretty, its flavor is spectacular.

It is usually sold in carts on the shore of the beaches in Ecuador. BUT if you are not ecuadorian, I suggest that you better consume it in a restaurant to avoid intoxication.

Why? I have a cousin from Canada who LOVES ceviche de concha, but every time he comes to Ecuador and orders ceviche from those beach carts, he spends the rest of the trip sick 😀

One of our favorite dishes made with green plantain, peanuts and fry fish.

The cazuela is very similar to sangos or corviches, but this stew is cooked and served in a clay pot, which keeps it warm and concentrates its flavors.

However be careful beacuse the served dish is extremely hot and you may burn yourself. In addition, it is accompanied with white rice, patacones and lemon.

Made from rice with a variety of seafood: from shell, squid, crab, shrimp, mussels, fish to shrimp.

The seafood rice is similar to the Spanish Paella, and you can find several variants throughout the South American coast.

Is an extremely generous plate, and it is served with a salad and tomato sauce.

This typical dish is served with the whole and fried sea bass accompanied by garnishes such as salad, patacones and white rice. There are times when they serve it with baked or fried potatoes.

Its flavor is delicious, but you must be careful when consuming it as it comes with the bones of the fish. 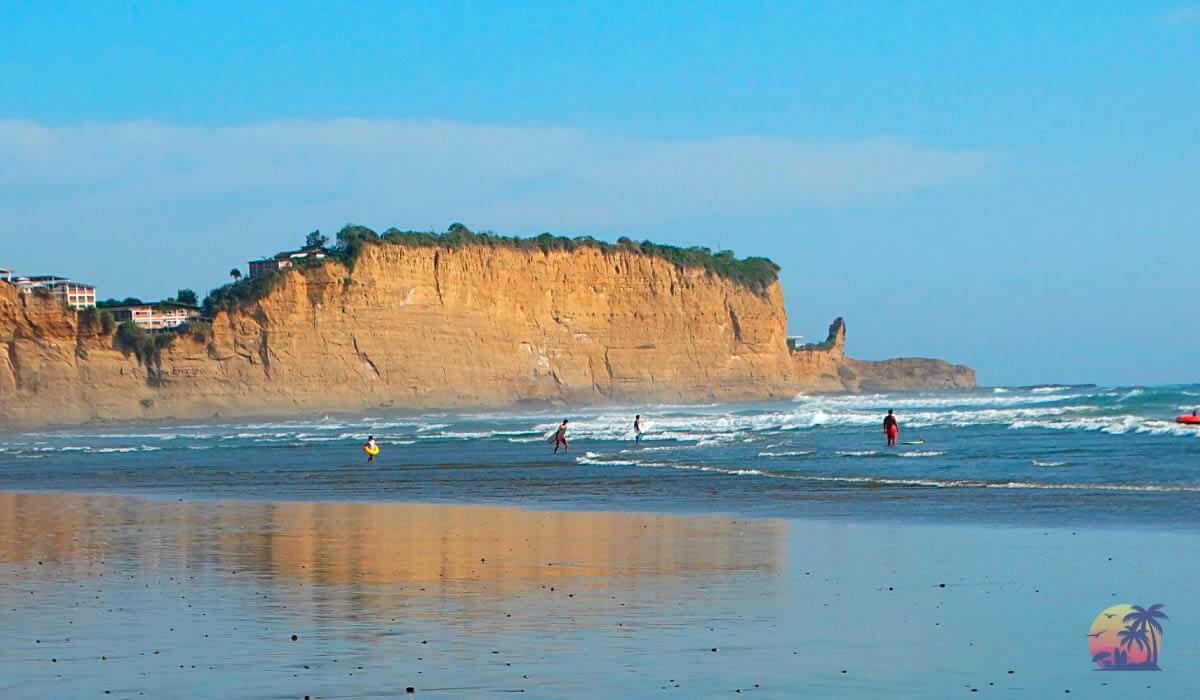 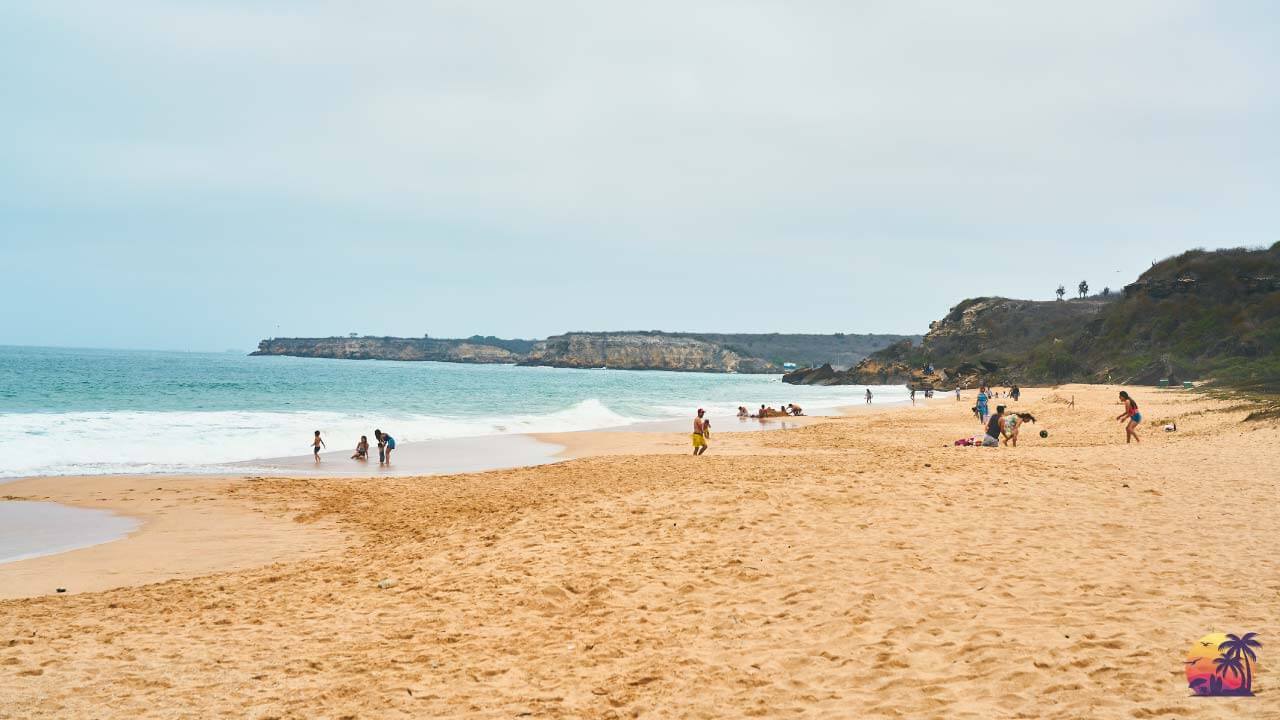 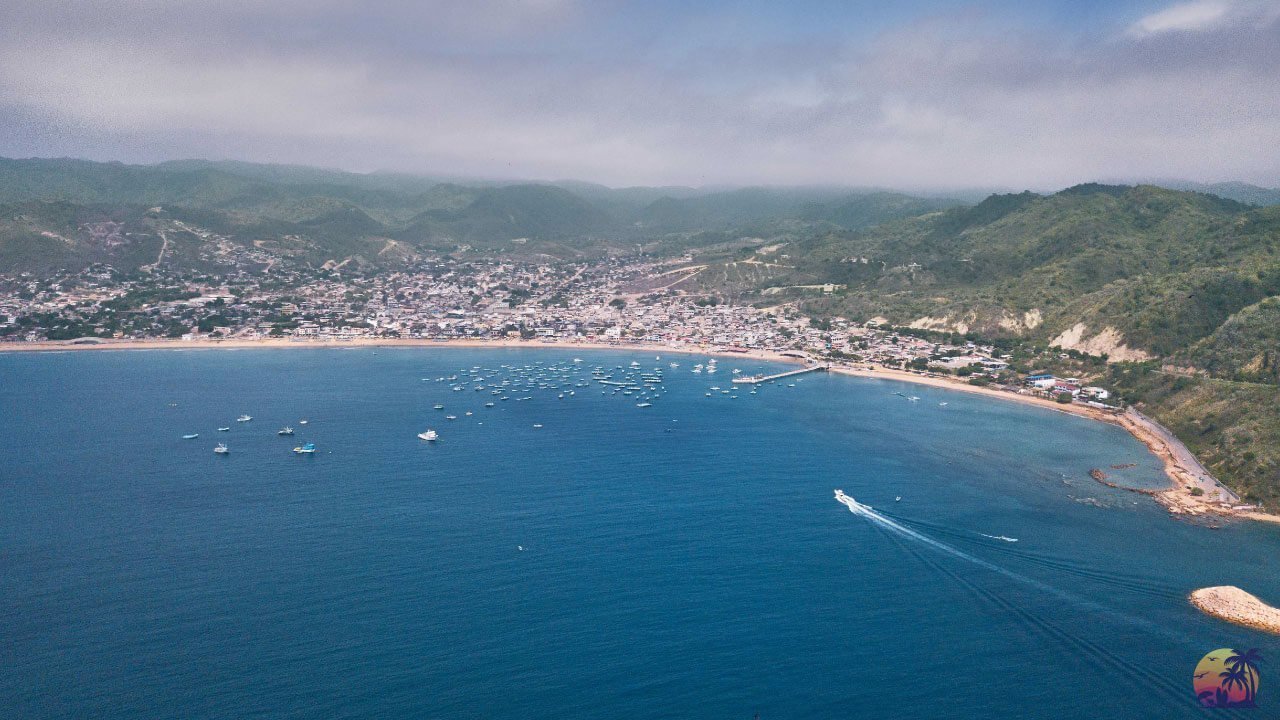 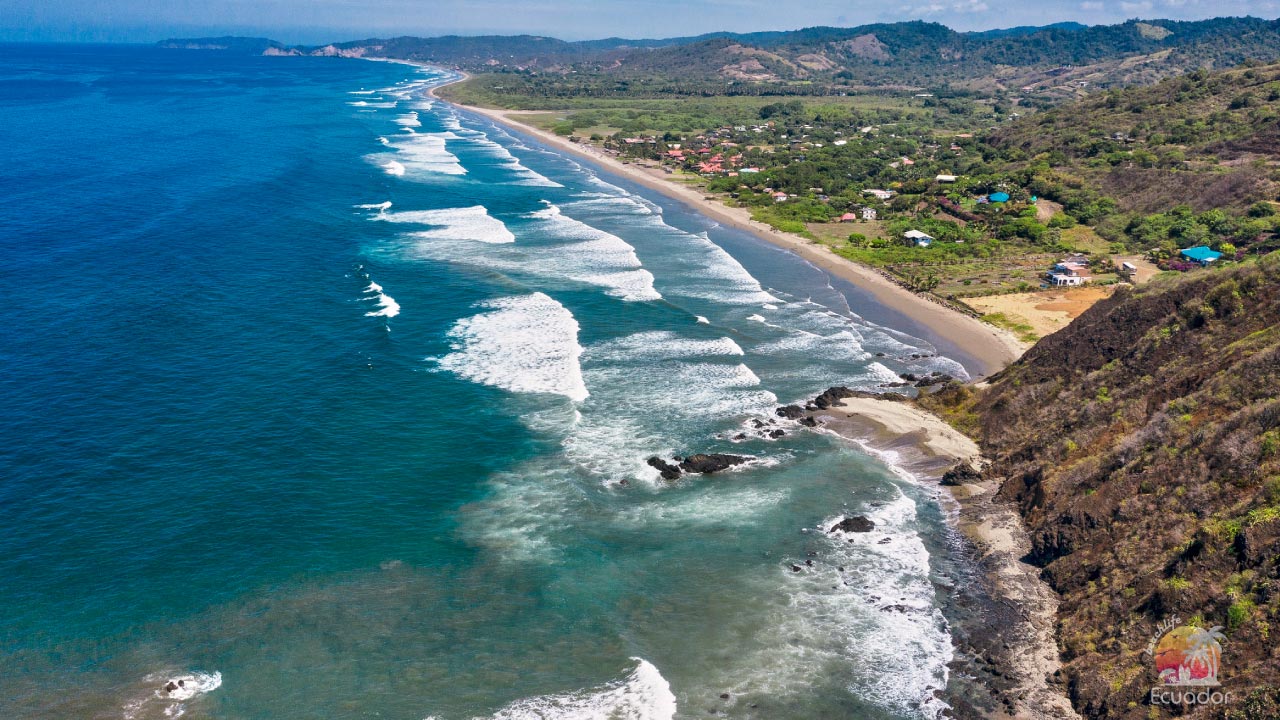 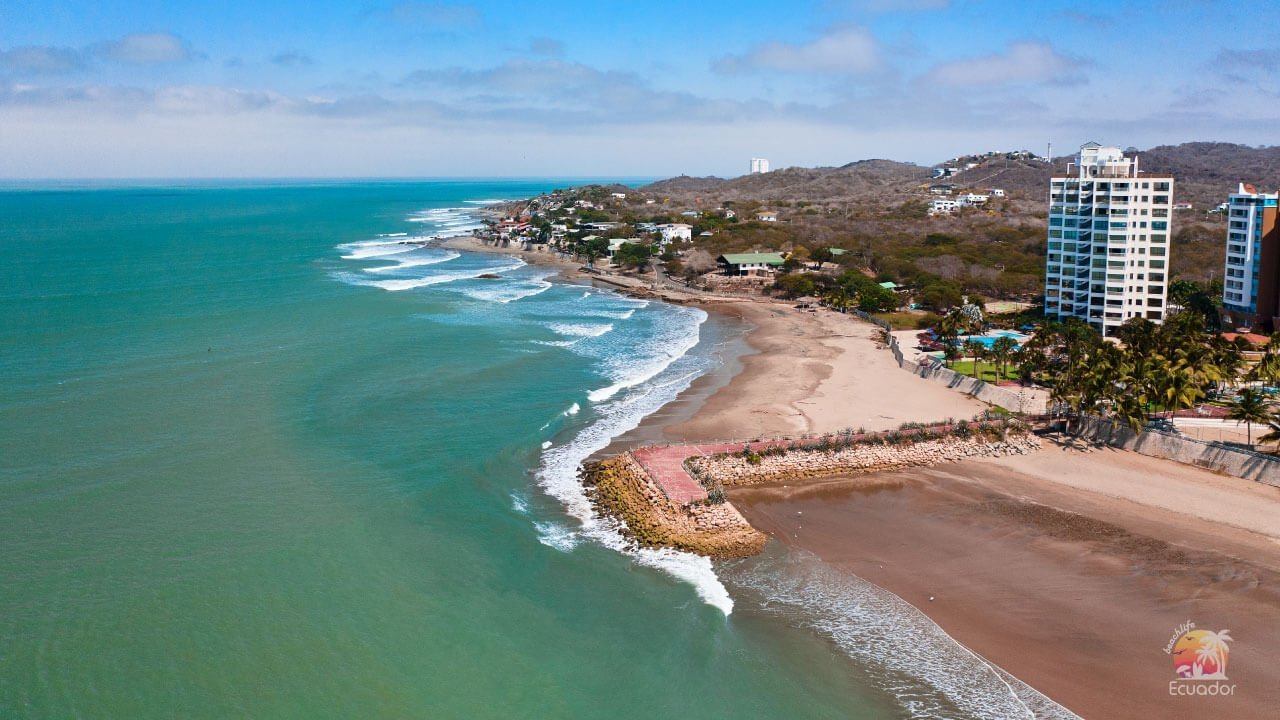 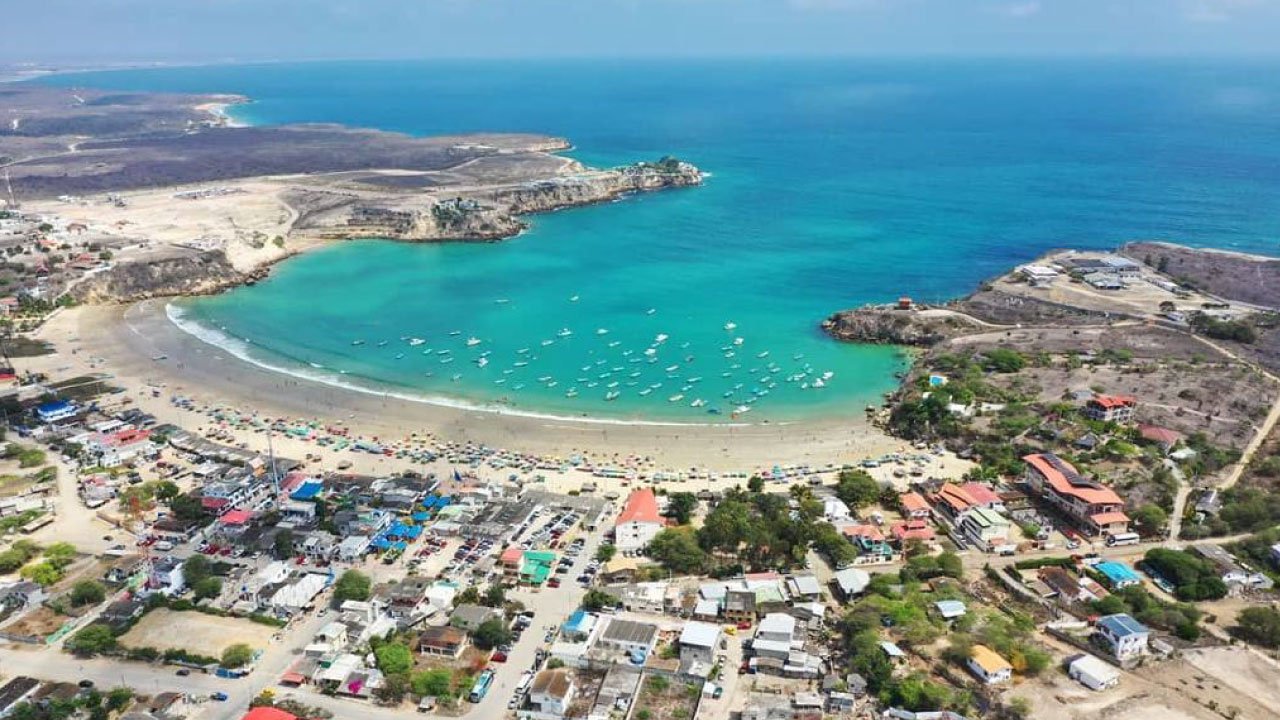 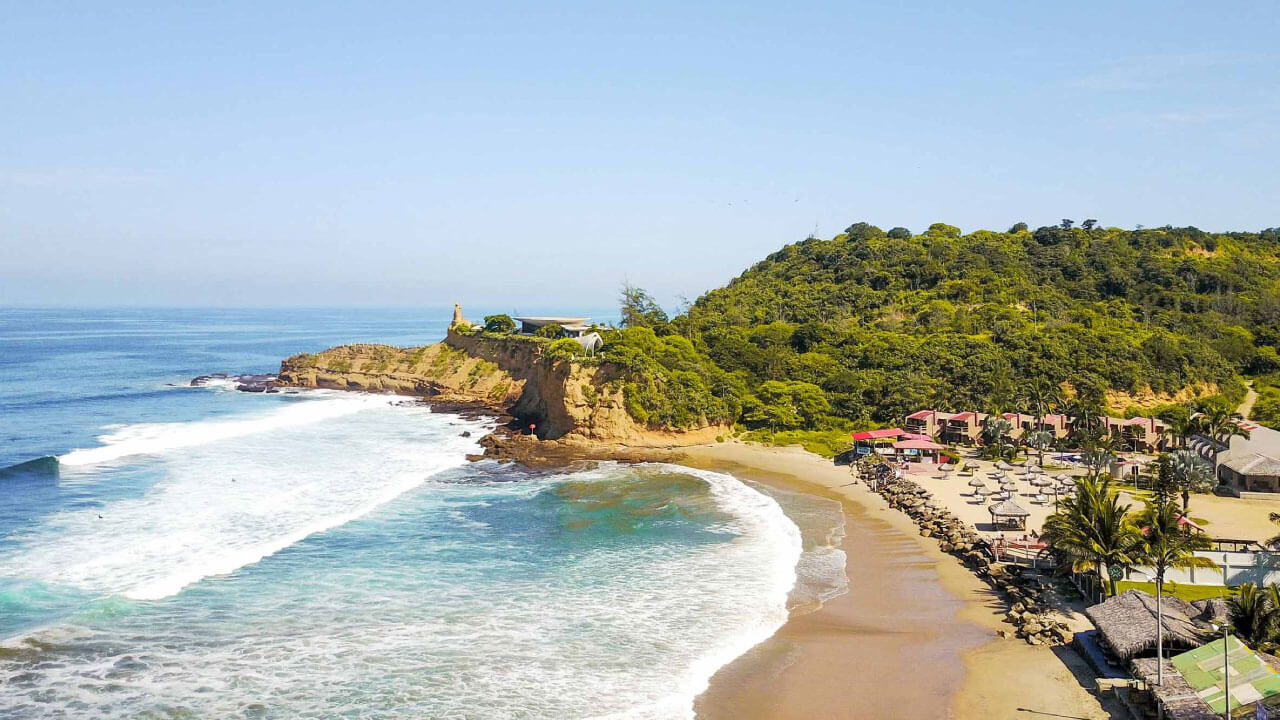